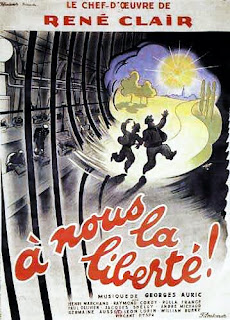 À nous la liberté is a landmark in the history of film comedy and sound film. Back in 1931 when almost all film directors in every country were cautiously using the new technology as a recording medium, Clair, with the help of Georges Auric's musical score, was exploring it as a creative medium. Throughout the film we see and hear many unusual sound effects and uses of recorded sound: the "sound" of assembly line mechanization done through music (using xylophones, among other instruments), aural flashbacks, singing flowers and more. 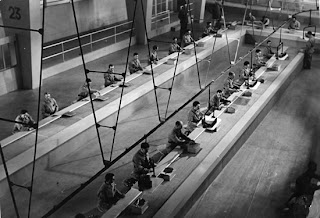 The film opens with an image of a wooden toy horse. Gradually we observe that this is an assembly line in a prison, staffed by prisoners. They sing (La liberté, c'est pour les heureux = "Freedom is for the happy") as they work. 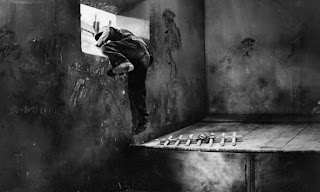 The film follows the paths of Louis and Émile. At the outset, they are convicts in prison, forced to work on an assembly line. They are separated when Louis manages to escape and eventually becomes the owner of a vast phonograph factory. Through a series of mishaps, Émile finds himself working at the factory (initially not realizing who owns it). The friends reunite; while Émile tries to pursue a love interest (never realized), Louis is threatened by former convicts from the prison, now gangsters. The film climaxes at the dedication of Louis's new phonograph factory, where everyone chases after money which one of the gangsters had stolen from Louis. The film ends with Louis and Émile as tramps, extolling the virtues of freedom. 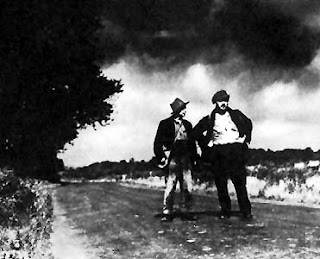 À nous la liberté clearly identifies the factory, school, and family as focal points of ideological domination. A seamless juxtaposition of the ideology of work and conformist pedagogy is achieved with one of the most celebrated shock cuts in early sound cinema. As Émile languishes in a grassy field within sight of factory chimneys, a disapproving policeman reproves him with the words 'Not working. Don't you know that...' - a sentence fragment that is finished by a schoolmaster dictating the words 'work is compulsory' to his captive class. After the camera tracks back to reveal a row of bored pre-pubescent children, the teacher continues his dead-pan dictation with the words 'because work is freedom'. 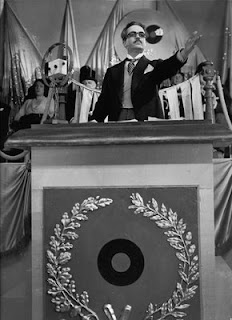 From Richard Porton's 'Film and The Anarchist Imagination' called 'Anarcho-Syndicalism and Revolt Against Work' that has a big chunk on Rene Clair and this film:
http://books.google.com/books?id=7_GPRz4Gis8C&pg=PA131&lpg=PA131&dq=a+nous+la+liberte+communism&source=bl&ots=yx8MFux8be&sig=mxnRwSj-mj3MfGTCnzt0K4MDxzk&hl=en&ei=yqceSviBFN7MjAfLnZWXDQ&sa=X&oi=book_result&ct=result&resnum=4#PPA131,M1
Posted by Full Unemployment Cinema at 08:43