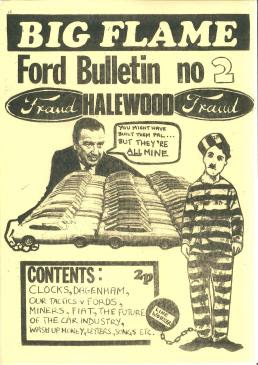 Focusing on the UK car industry through one vintage and two recent films:


British Sounds was made for (and then banned from) London Weekend Television. It is a documentary in style and form, but designed as a political artifact in which Godard contrives to assault the filmgoer's sensibility with a series of images and provocations. Slogans flashed on the screen are sometimes humorous, sometimes merely decorative, though Godard would deny this bourgeois reading.

Several extended scenes, such as those where Dagenham car factory workers discuss workplace relations, are crisp, simple and also an invaluable record of industrial rhetoric. Thus, the first part is a single ten minute long tracking shot of the MG (itself a bourgeois artifact) assembly line at the British Motor Car Company in Cowley, Oxford. Then, in what seems and purports to be an early attempt at 'feminist cinema' (though one constructed from a very male point of view), a nude woman walks around her apartment, chats on the phone and finally turns to face the unwinking and rather prurient camera. There's also a feminist text read over this scene but it all remains a poorly thought out shot at a less phallocentric cinema.

In the third sequence, shots of workers are intercut with a staged news broadcast running on a TV monitor and in the fifth, students at Essex University are making up radical posters and critiquing pop music. Finally, a fist punches through a Union Jack. All very agitprop and also prefiguring the admittedly less political preoccupations of the British Punk scene – still six or so years away.

From John Dawson writing for Senses of Cinema on British Sounds
http://archive.sensesofcinema.com/contents/cteq/05/37/british_sounds.html


Reel News, Visteon Workers Fighting for us All!, 2009


On 31st of March 2009 Ford/Visteon announced the closure of three factories in the UK and the sacking of 610 workers(1). The company was declared insolvent and put into receivership. The receivers visited all three plants; with no prior warning workers were sacked with only a few minutes notice and told only that the company had gone bust. No guarantees were given concerning redundancy or pensions payments. The management had made the workers work up to the last minute, knowing that they would not even receive any wages for their final shifts.

On the 31st workers in Belfast responded to the closure announcement by occupying their factory spontaneously. After a clash with security guards, workers secured the building and within two hours several hundred local supporters had visited the occupation. Two KPMG administrators were on the premises at the time of the occupation and refused to leave. So the workers locked them in a portakabin - where they apparently stayed for 36 hours with no food, before finally agreeing to leave! Such pointless dedication to their job... Some managers' cars also remained locked in the occupation.

Having heard the news about Belfast, the Basildon (Essex), and Enfield (north London) Visteon plants also occupied the next day. The Basildon plant contained no stock or machinery of much value to the company; so the workers trashed the site offices. A group of riot cops appeared and the workers were 'pursuaded' to end their occupation, presumably under the threat of 'leave or you'll be nicked for criminal damage'. They then began 24hr picketing of the plant.

Make it new John tells the story of the DeLorean car, its creator John DeLorean and the workers of the Belfast-based car plant who built it. The film deftly contrasts the DeLorean dream with its spectacular downfall during a critical period in Northern Ireland's history, and the canonisation of the car – the DMC12 – as a symbol of the American myth of mobility.

The son of an immigrant Romanian foundry worker, John DeLorean possessed a natural talent for engineering which took him to the top of Chevrolet, General Motors' most important division. Leaving this behind he persuaded the British Government to back his new venture – building a factory in Dunmurry in Belfast to produce a new sports car. Almost immediately beset by financial difficulties and allegations of embezzlement, DeLorean's attempts to keep the factory open became increasingly desperate and corrupt, eventually leading to his arrest by the FBI. The factory - which employed 2000 workers - closed in 1982, having produced just over 9000 cars.

Posted by Full Unemployment Cinema at 04:27