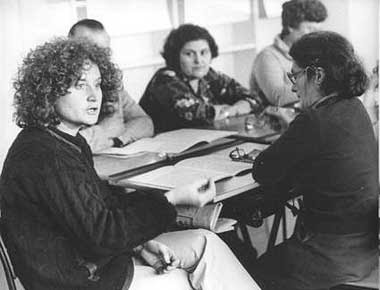 Even if [this] film is a conversation, the editing makes it into a text. How is it possible to “give people a chance to speak for themselves” without then “using what they say to talk about what I think is interesting?” – Marina Vishmidt, BFI Screen Online

Bred And Born features four generations of women in an East London family who talk about their own experiences and close family ties, and a women’s group who discuss their roles as mothers and daughters. Moving between these two groups is a fictional storyline: an actress plays two distinct parts - a middle class researcher sent to East London to describe and define the role of the mother within the family, and a 19th Century educationalist advocating motherhood as woman’s ‘natural’ and primary purpose. Gradually, increasingly conflicting ideas disrupt ‘truths’ which seemed to be solid and unquestionable, as elements of class, race and economics become historically visible. Bred And Born acknowledges the differences between women - differences that we are born into and bred to act out - apparent differences between the language of feminism and the narratives of individual lives expressing the same oppressions but locked off from each other by language and tradition.’ (Joanna Davis, Mary Pat Leece, from the Cinenova catalogue).

‘I have been reading how in Italy between 1974 and 1982, there existed ‘150-hours courses’ which were available initially to factory workers and farmers, but eventually extended to housewives and pensioners.' - Emma Hedditch, ‘Now That We Are Persons’

After I had been working with a particular group of housewives for a year, we started shooting the film Scuola senza fine (literally, ‘School without end’) almost casually, in 1979. I was able to get equipment free of charge and money to pay for the film was made available. The women had taken the '150 Hours Course' and had been awarded the completion of secondary school diploma in 1976.

Watching the project develop was like uncorking a champagne bottle. The women’s writing matured and began to flow and sparkle while Lea, whose book L’infamia originaria was about to be published, did not write anything else for several years. The women students, encouraged first by Lea and the discovery of Freud, then by the other teachers and by science, philosophy, and linguistic analysis (visual, written, and body languages), filled page after page of their writing pads and exercise books, with personal reflections on culture, themselves, their families, nature, and feelings.

Introduction to the script of the film Scuola senza fine by Adriana Monti. Translated by Giovanna Ascelle: http://www.universitadelledonne.it/english/scuola%20senza%20fine.htm

Posted by Full Unemployment Cinema at 03:38