A journey at sea in the company of containers , goods and modern day sailors, a scene akin to a long silent conversation with ghosts from other times. A mobile and secret exile made of repeated and repetitive gestures, "GenovaTripoli" tells us of the lige and the work of a crew on a container ship of Russian origin, the Jolly Indaco. Un until the '80s this ship was used by the Soviet army to transport military equipment. The documentary starts in Genova and concludes offshore in Tripoli on Christmas night. This is the first of a trilogy dedicated to the circulation of goods and to the world of docks and cargos.


From an interview with Marco Santarelli.

Q: from arms to containers. These are the "boxes" which are ultimately the main characters in the film, even though they remain visually and metaphorically in the ships hold.

MS: Well, containers are only the narrative pretext for this journey. What interests me is to show the work involved in the transport of containers, the contrast between a 'liquid society', where everything happens in real time, and a 'hard society', the one that allows for things that seem normal to take place. The good that are at our disposal have arrived at us through a journey. Sometimes thay have crossed rough seas, where it's easy for everything to grind to a halt. Behind this situation the constant 'risk' we find a 'hard' work force at play,


~~~WE HAVE A FEW OTHER SHORTS AND FILMS WE COULD SHOW. LET'S DECIDE ON THE NIGHT WITH YOUR HELP~~~~ 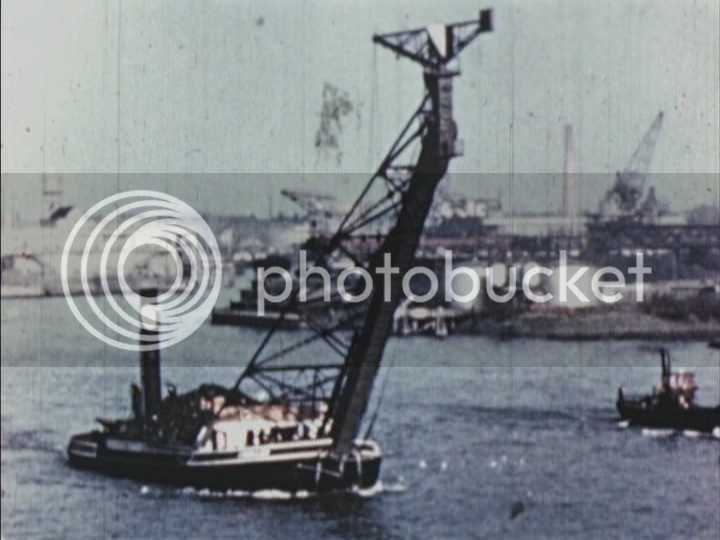 There are shots of ships, machinery, a canteen, and a union meeting. The film was supervised by the staff of The Seafarers Log, the union magazine. For the cafeteria scene in the film, Kubrick chose a long, sideways-shooting dolly shot to establish the life of the seafarer's community; this shot is an early demonstration of a signature technique that Kubrick would use in his feature films.

For first-timer Jason Massot, the impulse to make this poignant feature-length examination on the solitary, transient lives of merchant seamen was a desire to examine male solitude and transience. His self-funded DV documentary follows four seamen (a Swede, a Croat, a Polynesian and a Nigerian) as they wait in Rotterdam, the world's largest port, to return to the sea. While each finds himself there for a different reason, all share a world and profession that exerts enormous emotional, relational and economic pressures on them. On the cutting edge of globalisation, with their wages forever in danger of being slashed, they exist in a limbo of often deep loss, be it of home, family, female contact, or even identity. Massot watches quietly as they wait to move on, building the film distinctively from the 'downtime' rhythms of the mariners' days and circling thoughts. It's effectively accompanied by the guitar of Will Oldham, his ambient acoustic score giving a melancholy music to the echoing halls and empty reaches of the docks and 'placeless' industrial zones.

Raban's reflective, ambivalent approach to cinematic Modernism reaches its apogee in Thames Film (1986)...Narrated by john Hurt, it is the closest Raban comes to a conventional documentary, incorporating archive film from 1921-1951, panoramic photographs taken in 1937. Brueghel the Elder's painting the Triumph of Death and T.S.Eliot reading Four Quartets. Raban centres a study of the sites of modernity, and the meanings that time has inscribed into them, on the Thames, juxtaposing shots of the river in 1986 with readings from Thomas Pennant's Journey from London to Dover(1787, close to the emblematic date of 'modernity', 1789). Modernity is put on trial: Pennant's links between British imperialism, technological advances and the Thames are juxtaposed with derelict British imperialism, technological advances and pompous voiceovers from post-war newsreels anticipating the collapse not just of the Empire but also the ideals which supported it.
Gareth Buckell, review on William Raban DVD release (BFI 2005). See Lux : clip

On the women's ship Orlando the flags of attack, leather, weapons, lesbian love and death are raised with a beauty which dispenses with a total domination of the viewer's gaze.
The aesthetic is strictly stylized, exhibiting itself without overwhelming us. Description from Ottinger’s website

In this extravagantly aestheticized, postmodern pirate film she appropriates the male genre for feminist allegory. Madame X — the cruel, uncrowned ruler of the China seas — promises "gold, love, and adventure" to all women who'll leave their humdrum lives behind. Gathered aboard her ship, Orlando, are a range of types: a frumpy housewife, a glamorous diva, a psychologist, a very German outdoorswoman, a bush pilot, an artist (played by Yvonne Rainer), and a "native" beauty. Their utopia devolves into betrayal and self-destruction—leading to eventual transformation—as the power games of the outside world are ritualized among the women. Tabea Blumenschein, who designed the film's outrageous costumes, appears in a dual role as the pirate queen and the ship's lovely, leather clad figurehead. Refusing conventional storytelling and realism for a rich, non-synchronous soundtrack, the film invites its audience along for an unprecedented journey that celebrates the marginal." — Patricia White, Swarthmore College
Posted by Full Unemployment Cinema at 07:56