The Dove on the Roof 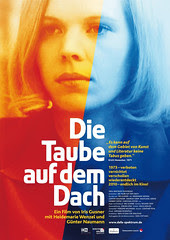 A pamphlet to accompany this screening is available here: http://zinelibrary.info/full-unemployment-cinema-dove-roof-and-vw-complex-0

The Dove on the Roof / Die Taube auf dem Dach

Hartmut Bitomsky's intriguing investigation of Volkswagen combines archival material and his own footage. He writes:

1. What is a complex? A psychic strategy that organizes complicated proceedings according to a particular plan and, at the same time, manages to make the whole thing impenetrable; the hyperactivity surrounding a defect so dramatically emphasized that nobody can get to the bottom of it.
2. A Volkswagen joke that used to be told before the war: A VW employee secretly smuggles out different parts every day so he can build himself a car at home. His bewildered friend asks him why the car still isn't finished. The other: "No matter how I put it together, it always turns out to be a cannon."
3. Sklovskij: "The machine gunner and the bass player are a continuation of their instruments. The underground trains, the cranes and the automobiles are the artificial limbs of humanity...these things are only as good as what man can make out of them."
4. Car stuffing: There have often been jokes made about the capacity of the beetle and record attempts have deduced that more people can fit into a beetle than there is actually room for. VW is a compilation word: "people" and "car." The plant used to belong to the state; then it was privatized and became a limited company. Nobody talks in terms of "people's shares" any more...