Lindsay Anderson and Shelagh Delaney's The White Bus is a surrealistic film about a secretary who takes a strange trip, part of which takes place on the eponymous vehicle. The nameless girl has a seemingly dull life, which is interrupted by periodic flights of fantasy involving suicide, recreations of paintings, and pieces of meat that suddenly run blood-run. Between these fantasies are the details of her real life, especially as she begins a journey home to visit her family. She encounters a wide variety of people -- a teen-ager exceedingly angry that his rubgy team has lost a match, a young man who proposes marriage, a lord mayor who enjoys feeling her leg -- as she travels to locations ranging from a community center and a public library to a natural history museum and a civil defense demonstration. Along the way, the girl maintains a façade of passivity, even when events become quite surreal, as when all of her traveling companions turn into human dummies during the civil defense drill. At the end of the film, she enters a restaurant and eats dinner while the owners pile chairs on the tables around her, obscuring her from view and complaining about the never-ending pace of work.

A classic Ealing comedy running fast out of  wartime austerity into a post-war rearrangement of class, capital and technology about combine again in a headlong collision. The films central tension makes for an interestingly prescient take on theories of communisation: "A young scientist invents a material that is indestructible and repels dirt. He soon finds himself caught between the moguls of the textile industry and the trade unions, all equally determined that his invention never sees the light of day." - Screenonline 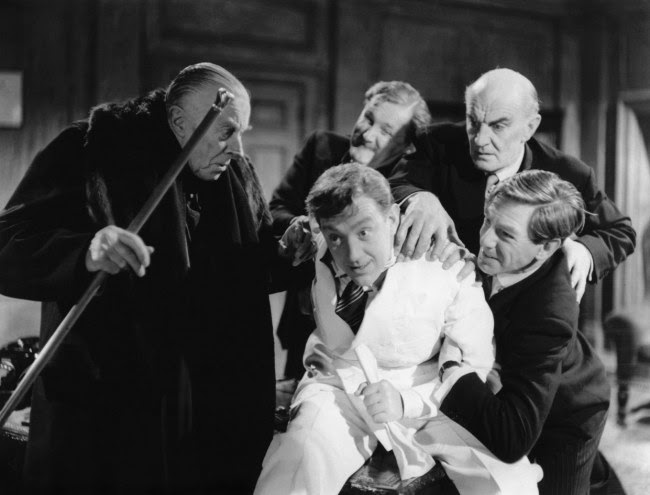 The Man in the White Suit is a whirling mess: of sabotage and complicity, of things falling apart against the threat of never falling apart.  A desperate, clinging defense - capital and labor, all together now, or we're all fucked! - in the name of decay and forced obsolescence.  A coming together as a nasty collective (headed up by arch-capitalist Sir John Kierlaw, seen above with cane, seen elsewhere haunting the dreams of child labor, a Dark Crystal Skeksis of textile monopoly, his laugh a hissing poisonous exhalation that has to be declared after the fact to have been laughter ) to destroy to protect the order of things that are destroyed, run-down, and cast out "naturally."

Essay by E.C.W. - http://socialismandorbarbarism.blogspot.co.uk/2010/06/its-just-suit-it-looks-as-if-its.html
Posted by Full Unemployment Cinema at 11:11